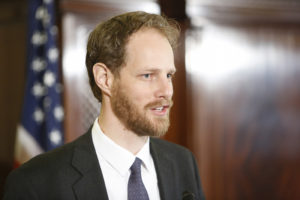 ...is a scholar, entrepreneur, traveler, student of life, a father and husband, and a teacher. He lives in Tbilisi, Georgia, with his wife and children, but keeps close ties with family and friends in the United States. He sings in a church choir, supports local musicians and NGOs with his voice in the Tbilisi community, and regularly travels the region.

Graham has held several appointments including as a post-doctoral fellow at the Yale Institute of Sacred Music (see video portrait). At Yale, he was also a lecturer in the Yale Music Department teaching a course titled, "Early Polyphonies: East and West" (sample lecture).

The PhD dissertation by John A. Graham with audio and video supplements was submitted to Princeton University in 2015. Titled "The Transmission and Transcription of Georgian Liturgical Music" (2015), the dissertation investigates the history of how an oral musical tradition in crisis was partially saved using the technology of European musical notation. The work also includes thorough literary review and documents the written and audio sources for the liturgical chant tradition of the Georgian Orthodox Church, both medieval and modern. See reviews of the dissertation by the reading committee here.

As an active facilitator of cultural exchange, Graham organizes performance tours in the United States for ensembles such as the critically acclaimed Anchiskhati Church Choir (2016, 2005), the Sakhioba Ensemble (2012), and the Zedashe Folk Ensemble (2007). He also assists with performance tours in Georgia, organizing for the Yale Slavic Women's Chorus, the Capitol Hill Chorale, and others.

John A. Graham lectures regularly on topics relating to the history and revival of Georgian sacred music, and gives practical workshops on Georgian folk and sacred music. At Princeton, he directed two Georgian folk choirs during the years 2006-2013, the Yale Georgian choir (2015-2016), and currently sings in the Aghsavali Choir in Tbilisi.

Currently, Graham directs his own high-end cultural tourism business John Graham Tours. The company currently offers tours in Georgia, Armenia, Turkey, and Ethiopia. Reviews for the business have been outstanding on Facebook, Tripadvisor, and the Testimonials page, and one tour was featured on the front page of the New York Times.