John A. Graham lectures regularly on topics relating to the history and sources of Georgian sacred and folk music, as well as the modern revival of these repertories. His research focuses on the late nineteenth century, especially the use of a technology (music notation) to save the last remnants of the oral traditions of local music in Georgia.

Video samples of John’s talks and lectures may be seen below; a longer list of invited talks and conference presentations is at the bottom of the page. Links to published articles may be found on the publications page.

Lecture at University of Notre Dame (2019)

Lecture at the Library of Congress, together with the Anchiskhati quartet (2016)

Lecture at Wesleyan University, together with the Anchiskhati quartet (2016)

Lecture delivered at the 4th conference of the International Society for Orthodox Church Music (ISOCM) in Joensuu, Finland (2014) 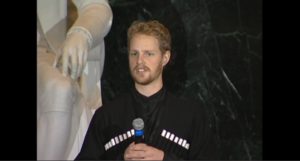