Generally shy to do radio or television spots about himself, John is a willing participant in programs that feature subjects that he thinks are worthy of promoting, particularly relating to the preservation of culture or the environment. Here are some of the television and radio spots featuring John's contributions or interviews. For additional video, please see the performances or workshops pages.
Radio segment about Georgian chant and folk music hosted by Sam Lee on BBC-4, featuring commentary and organization by John Graham (2018). "Suppression and Survival" BBC-4  https://www.bbc.co.uk/programmes/m0004cpm 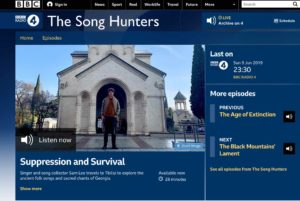 Television segment (in Georgian) on my involvement in the study and performance of Georgian chant. Here we perform three rare variants of the troparion to St. George (2017)

Discussion about aspects of Georgian chant history - in Georgian (2012)